As part of the Diocesan Silver Jubilee Celebrations a choral competition was organised during which the competing choirs sang two songs on stage. The first song, the Jubilee Anthem specially composed by Mrs. Elizabeth Sasu for the celebration of the 25th Anniversary of the Diocese, and the second an optional song.

This singing was first held in the five Deaneries of the Diocese. Those who took the first position in the respective Deaneries represented their Deaneries on the Diocesan level. The grand finale of the Silver Jubilee Choral Competition was held on Saturday 23rd September, 2017 at the Cathedral Parish hall. In all five choirs participated.

All participants received awards including medals and certificates. Special medals and gifts were presented to the composer of the Jubilee Anthem Mrs. Elizabeth Sasu of St Joseph Parish, Adoagyiri, and three impartial judges of the competitions. The winners were presented with medals and a golden trophy. All the awards were kindly sponsored by Snr. Crusader Maurice Nartey of St Theresa Parish Suhum. 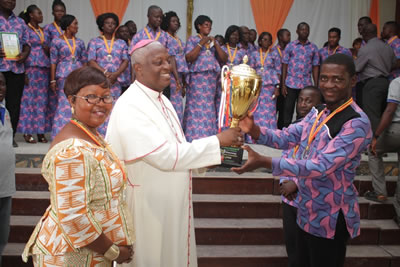 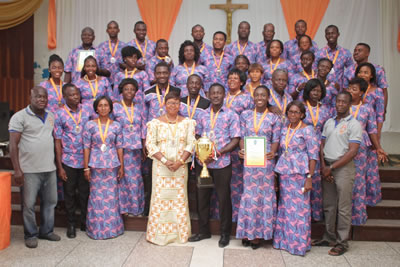 The winners in a group photo exhibiting their awards